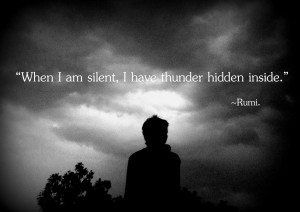 I secretly don’t believe that everyone being on their phones all the time instead of paying attention to what is really going on around them is a new problem at all. I secretly believe that not being present has been an issue that has been facing humanity this whole entire time, and that phones and tablets have just created a new way in which this issue becomes a lot more obvious. Think about it. What are you doing when you are looking at your phone instead of being still and observing the world around you? You are nervously fiddling with something (anything — the best thing you have available) in order to distract yourself from the immediate reality of temporal existence. I submit to you that people have been doing this for as long as there have been people.

The quietest place on Earth is a specially constructed room in Minneapolis. The room is what’s called an anechoic chamber, which is a Latin term, basically meaning no echo. I know that this is all true because I saw a video about it on Youtube, so my information is definitely good, people; placere autem non timere. The walls and ceiling of this chamber are covered with these large foam ridges which are basically very efficient at absorbing sound. It is commonly reported that it is basically impossible for a person to spend very long in this room without suffering some sort of a breakdown — although I know that this is not, in fact, universally true because, in the Youtube video that I watched, a guy spent just about an hour in there (in absolute darkness, to boot) and didn’t have a problem. That guy did seem pretty well adjusted, though, and in my experience most people are pretty messed up, so I don’t find it hard to believe that spending overly much time in a place where one is left alone with no stimulus other than their own awareness of reality would simply be too great a burden for the average human being to bear.

I secretly think that there are only two modes of being alive. You either embrace reality, or you do whatever you can to escape from it. Most people do the latter because they have absolutely no idea how to do the former. Embracing something as broken and twisted as the reality we are given is not something that comes naturally. It must be taught somehow. It must be learned.

I submit to you that we have all been looking down at our phones since the inception of man, and that we will continue to do so until we are made aware.