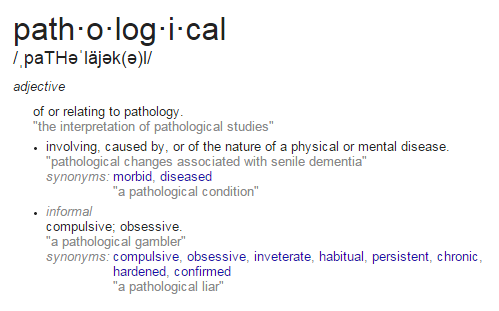 There exists a halfway decent explanation of what I mean by the term pathological religion in a story I came across years ago:

A group of pilgrims were traveling on foot around the outskirts of Jerusalem, with a tour guide who was native to the region. As they walked, the guide told them about the ancient tradition of tending sheep and how it works.

“The shepherd does not walk behind the sheep,” he said, “but rather goes in front of them, leading them. He actually guides the sheep by speaking to them. They follow him because they know his voice. Christ referred to this tradition when he said,

‘The shepherd walks right up to the gate. The gatekeeper opens the gate to him and the sheep recognize his voice. He calls his own sheep by name and leads them out. When he gets them all out, he leads them and they follow because they are familiar with his voice. They won’t follow a stranger’s voice but will scatter because they aren’t used to the sound of it.'”  [John 10:3,4 The Message]

As he was speaking, some in the group began to point and laugh as a man came into view, walking behind a flock of sheep, driving them along with a stick! “I thought you said that the shepherd always leads the sheep from the front,” one of the people in the group asked. “Oh, he does.” The guide replied. “That’s not a shepherd. That’s a butcher.”

The great pursuit of all religion is the return of humanity to a perceived original state of union with God. That this union was the intended aim of creation to begin with, the human conscience inexpressibly testifies. We all somehow know it, and what we do with this knowledge invariably defines who we become in this world.

There is also a second type of awareness that characterizes the human condition, one that is basically the opposite of the first. The first speaks to an innate knowledge of God as Father, Teacher, Lover, and Friend. The second expresses itself in a certainty of unworthiness, futility, and desperation. It convinces us that all is lost, that we are abandoned, and that there is nothing to be found in the pursuit of God except disappointment and ruin.

Much of our experience with religion finds itself rooted and grounded in this latter piece, and in the viciously compulsive drive to exert effort towards proving that this perceived abandonment may be somehow reversed. This website is about how I became a committed Christian when I was young and naive, how that commitment and naivete were exploited, how I found myself tumbling down the rabbit hole of bad religion, and how I found a successful avenue of recovery from the mental hell that this unfortunate predicament culminated in. Ironically, I found it in the very commitment to Jesus Christ which had originally seemed to be my undoing.

If you find yourself shaking your head and beginning to click away, I would ask you to stay just a bit longer and to see precisely what I mean by all this. It may perhaps not be quite what you think.

A wise man once told me that when religion is used to deceive and exploit, it is the work of people, not God. As I have become willing to accept that, I have found that it is absolutely true. It is one of the great ironies of this place called Earth with all the humans in it that virtually all evil is done in the name either of God, or at least of “good.”

Pathological religion is what happens when early childhood impressions of shame and fear set themselves up in a person’s conscience and torment them day and night with convictions and certainties that their best will never be good enough, and that they will always come short of escaping the wrath of an angry God.

Pathological religion is what happens when mental illness like this leads a person to become involved in an exploitative, cult-like group, and to be driven so far into despair by these interactions as to give up entirely on the prospect of ever being anything more than an utter failure.

Pathological religion is what happens when a person’s frustrations at such perceived inadequacies become so repressed that they end up eroding and eventually destroying every relationship in the person’s life which bears any semblance of healthy, loving community whatsoever.

Pathological religion is what happens when, unable to process (or even to realize) the actual nature of the aforementioned scenarios, such a person experiences a psychotic break with reality and believes themselves to be ‘enlightened’ in such a way that precludes all moral responsibility, and into which they then descend full force.

At least that is what it has been in my experience. We all have our own stories, but that is mine. It would have been bad enough if I had suffered through it alone, but I dragged my wife and children along that brutal path behind me until it had nearly destroyed them. My wife, once so in love with me that she had been willing to endure the unconscionable and hope against hope for a redemptive miracle, found that her affections had grown cold and her hope had been deferred so long that she had actually become dangerously sick. In a desperate spasm of self preservation she left once and for all, and for the first time in my own memory, I found myself without anything or anyone whatsoever to cling to for security.

Up until that time there had always been something or someone that I was able to latch onto and derive my sense of identity from, but at last, in that place of true and absolute vulnerability, I found myself able to surrender everything to the full and sincere pursuit of my destiny as a human being successfully executing the pure and simple act of being fully alive in the present moment, here and now on the face of the Earth.

And so I will fight towards the attainment of this goal by any means necessary. I will lay down my fear and my self-absorption (to which I can so automatically cling unless I remember not to) and I will focus on one thing alone: making that next right choice.

And I can always be assured that, no matter what the circumstances, that choice will be made in the direction of love. I can remove all mystery and confusion by simply allowing myself to be aware of that small and obvious fact. Love is the one thing that never fails.

Pathological religion begins when the voice of God gets mixed up with other voices, and the only way to really combat this is to spend time getting to know God personally.

It is unavoidably necessary that we must spend a lot of time with someone if we desire to know them well. It is no different with God. For me, this was made difficult by the fact that God is an invisible deity Whose very existence my propensity for analytical thought has led me often to question, and whose primary mode of indelible communicative effort is represented in a collection of ancient writings (the Bible) put together by human beings — a concept with which this selfsame propensity has caused me severe internal wrestling.

These difficulties have been intensified in that I have also struggled all my life with Attention Deficit Hyperactivity Disorder. It is a condition that is perhaps over-diagnosed, and trivialized in popular culture, but I can assure you it is a real problem. It’s like scouring a book with a highlighting marker, intending to mark only the important bits, but somehow being made (by some terribly annoying force) to involuntarily highlighting the whole entire thing. The best description of ADHD I ever read likened the condition to existing perpetually “in a soft rain of Post-It notes,” trying to decide which things are important, and which things should have more attention paid to them, but being unable to do so because of the fact that everything seems to have been already marked as important.