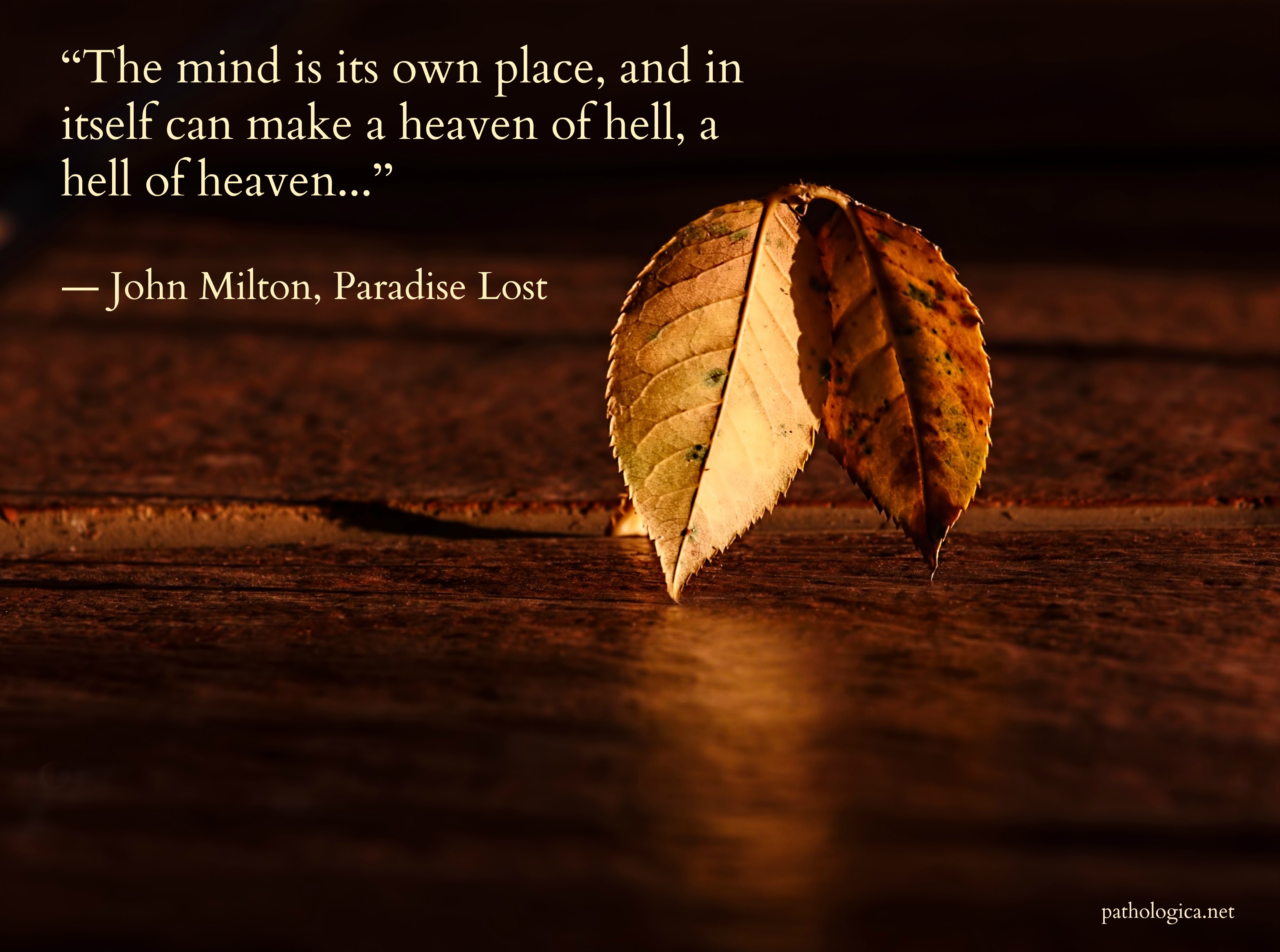 Religion is the ultimate distillation of evil. It is the most vulgar form of profanity. Religion hijacks the innocent vibrancy of spiritual youth, veritably squashing it with shame, and then offers to control the pain of that shame with superficial (and grossly artificial) means of righteousness. Even the word ‘righteousness’ itself has been so marred by the influence of religion that it generally doesn’t register correctly in our minds. It conjures images of stringent, puritanical discipline, and haughty, patronizing tones, though its etymology shows that all the word itself was actually meant to convey was the existence of a thing in its originally intended state; and all this actual God thing does is affect genuine restoration to such a state.

Human beings are physical manifestations of the divine. We are made in the image of that great Love who creates and governs, and in whom all things consist…but this is not readily apparent by observing the present state of humanity. We perceive it through veiled intuition, easily misinterpreted or dismissed. In our present natural condition we war and strive, we envy and hate…so much of our motivation is thoroughly saturated with self-interest. At the same time, the deepest reality of our intended design is crying out within us, yearning for love and compassion, desiring peace, wanting to strive instead for the reconciliation of all humankind with their original estate, which in and of itself is thoroughly selfless in nature.

We possess an innate sense of things being either good or bad, and should we detect a deep and perhaps obscured hunger for that which is good, we then also find an absolutely insurmountable foe in the impenetrable obstruction of its satiety by an altogether unequal and opposite force, screaming on forever: the appetite for that which we feel somehow certain must be bad. We attribute these distinctions purely to the effects of socialization carried on from antiquity, but such explanations, under even mild scrutiny, reveal themselves as little more than the equivalent of a child’s insistence that something be so, just because.

In fact, we have very little in the way of actual, demonstrable explanation for this complex dilemma of conscience. It basically follows that the solution to a problem like this would not be something along the lines of reason or human logic. Intelligence alone and unaided does not help us in the interpretation of these realities. Rather, it hinders us. And this makes us very angry, which adds insult to injury, so we do all kinds of things to support our ability to continue to hide from it.

One of these things – the masterpiece of all such various things – is to participate with religion. Religion is a sort of device for the reconciling of man to his insufferably wounded conscience, but it has actual power to do only the opposite. It lacerates and infects said wounds by perpetuating fear to no end, and by promising a magical reprieve in exchange for some type of performance (penance, holiness, monetary contributions) though this promise is never actually delivered upon.

It’s the ultimate dangling-carrot routine. It is a form of music without any resolve. It’s the worst joke ever told…and so, of course, no one is laughing.

The story of Jesus is a study in all that comprises very antithesis of religion, though this would seem the epitome of all that is counter-intuitive to the modern mind, with its cultural backdrop of Jesus-as-the-Christian-God, and everything familiar to us in this context. Please do understand, though, that there is a reason why Jesus was executed at the behest of the most thoroughly religious demographic of his day. His very existence was an affront to them. If history is to be believed, Jesus of Nazareth acted as the single most effective middle finger on record, against greed and hypocrisy, against oppression and injustice, and against the ineffectual status quo of pathologically religious affectation that has characterized human civilization, virtually from jump street…and that is precisely what ended up getting him cut down in his prime, with a degree of malice reserved only for those who have most severely threatened the powers that be.

We are almost completely blind and deaf to this now, though – to the actual nature of who Jesus was and what he even stood for – because of the strangely natural syncretic amalgamation that takes place within humanity as a response to any sort of apple cart tipping whatsoever. In the centuries following his death, Jesus somehow became a rubber stamp for the exact kind of evil his words and actions were meant to undo. This is typical, though, of our condition, and it’s a discussion that could literally go on forever because of this exact principle: the tendency of the human soul to resist anything that threatens a perceived source of comfort which is at once toxic and irresistible.