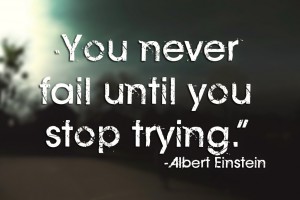 A story is told of two brothers who struck out for California during the Gold Rush. They sold everything they had, headed west, staked their claim, and began excavation of their very own gold mine. They immediately met with a small measure of success, stumbling upon a vein of ore right away and following it down below the surface. Before long, though, the trail had vanished. They dug and dug, but to no avail. It seemed that fortune had dealt them a cruel blow. Weary and discouraged, they gave up and sold the land. The person who bought it from them hired an engineer who did some work and then advised that digging be resumed in exactly the same spot where the brothers had left off. This was done, and after moving only three more feet of earth, the mine’s new proprietor discovered that the ore resumed its course, and led to a nearly incredible amount of the precious material. If only the brothers had continued to dig for three more feet, they would have become millionaires many times over.

Now, this is just a stupid story about people digging in the ground to find something shiny, but It illustrates a universal truth about perseverance.

Perseverance has not been something that has come naturally to me in life. Not at all, whatsoever. In fact, to tell the truth, I would say it has been the single most difficult character quality for me to cultivate. You see, from a very early age, discouragement and hopelessness seemed to come to me more readily than anything else in the world. Without getting into the deeper issues of the whys and wherefores, let me just say that it has not been pleasant, overall.

Strangely enough, raw courage has flowed through my veins in something like limitless supply since basically before I could walk. My parents tell a story of me having gotten lost during a hike in the woods with them at a national park or something when I was three or four. I guess I ended up eventually making my way back to them, led by two teenage girls who had found me, and who reported that I had marched right up to them, identifying myself only as “Superman,” and refused to disclose any details whatsoever about where I had come from or what I was doing. When I was 10, I was walking through some woods with three of my friends, when a seven-foot-tall creature that we completely and totally thought was actually the real Bigfoot came crashing out of the foliage. The others took off screaming, and I picked up the biggest stick I could find and braced myself to kill this thing when it came at me (It ended up being one of my friend’s uncles, dressed up in a gorilla suit, a fact which was disclosed to me presently in order to prevent further awkwardness or confusion.)

So how does that work? A total lack of self confidence coupled with an overabundance of absolute readiness to plunge headlong into danger without any reservation whatsoever. Well, let me tell you, gentle reader: it does not work very well. The universe is a mess.

What ended up happening (as those of you who are reasonably good at math or versed in psychology may already have guessed) was that I ventured out recklessly into the world without thought or preparation, ended up in a vast ocean of catastrophic personal failure over and over again, and eventually came to a point where I became convinced that, no matter how hard I tried to correct things, I would end up failing anyway. Certain of the inevitability of ultimate ruin, I stopped trying.

I’m not sure where I’m going with this. Sometimes I just start writing something as a sort of act of defiance against depression, anxiety, and all that other dark, ugly stuff that tries to have a turn in the driver’s seat once in a while. I do it as a way to actively choose to stand up and fight, rather than lay down and die, and I don’t always have a specific idea or a direction in mind. I suppose, if I found myself suddenly confused and drowning in the middle the ocean, though, I would find that it would first be necessary to just start surviving by moving my body in such a way so as to prevent complete submersion.

One thing I know: if I do not go forward, I will not get any farther. I know this because it happened to me once. So now I have gotten back up, and I move onward, no matter what.