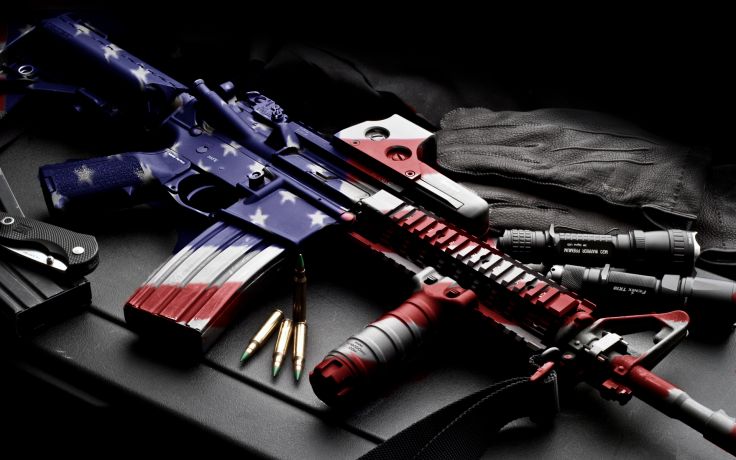 A while back, a photograph became widely circulated over social media. It featured a young lady in front of an American flag, holding a rifle in one arm, and with a Bible tucked in the other. She’d deliberately posed this way in response to a sarcastic criticism of a photo that she’d previously posted online, of her holding a cup from Chick-fil-A and wearing a “Pro Life” T-shirt, while standing in front of a Hobby Lobby. (The criticism had been something along the lines of “Gee, the only things missing from this picture are a Bible, the American flag, and an assault weapon.”)

Views on abortion, gay rights, and the questionable ethics of marketing unhealthy food to children aside, I just want to say that, above and beyond all of its other idiosyncrasies, I have always thought it especially weird that conservative Christianity in the United States believes so strongly that using lethal force in self defense is something that should be seen as a defining characteristic of its practice.

To clarify: I identify as a Christian, though I have long found myself at odds with many of the ways in which Christianity is portrayed and taught. This blog is in part about the ongoing internal process of untying the proverbial knots of just exactly what has gone wrong in this world that the spiritual legacy of a man who taught reconciliation, forgiveness, and nonviolence should become so closely associated with greed, abuse, and war mongering (because, unfortunately, when you say “Christianity” to people, many times these are the impressions that rise up.)

I remember when I first became aware of the whole gun thing with America. I was 22 years or old, and I was in a fundamentalist Christian cult. Shortly after 9/11, all of my friends suddenly started getting very excited about owning guns. There had been sort of militant overtones running through this group the whole time anyway, since the embryonic stages of its development, but there was just one day where all of a sudden everyone was like, “I’m getting a Glock, how about you?”

I remember feeling really disturbed at first. Our entire life’s purpose was supposedly based on the teachings of a person who had stressed absolute nonviolence and enemy love (to the point of allowing himself to be tortured and executed while praying aloud for the people who were doing it.) How did advocating violence, or even self defense factor into this?

I was still a kid, though, and very susceptible to third-party suggestion in general. Still, it took maybe a good three or four months before I allowed myself to be cajoled into getting geared up. I mean, let’s face it: there is something very appealing to your average dude about owning high-tech weaponry, and it’s okay to acknowledge that, just as long as you don’t start trying to pretend that there is anything noble or spiritual about it. Violence is ugly. We know that it is.

I originally went with the Beretta because it just felt so much nicer, and shot so much smoother, but I ended up getting peer pressured into picking up a Glock, too, and I hated it for like three years until I finally sold it.

What surprises me isn’t how much Americans love their guns. I totally get that, and it doesn’t confuse or alarm me at all. (Ok, that last part is a lie, I guess, because this whole post is about how it does confuse and alarm me.) What surprises me, though, is that, by and large, the Americans who love their guns so much that they will walk around WalMart with a baby in one arm and an AR-15 in the other just to prove a point are the same Americans who make a very, very big deal about being sure that the entire world knows just exactly how serious they are about Jesus, and I just don’t get how that works.

To me, the two things are entirely, entirely separate and irreconcilable. Jesus and guns, I mean. I like guns, sure. To be completely honest, if I had to, I would use one to defend myself. I don’t think that’s in keeping with what Jesus taught, though, and it’s definitely not in keeping with what he did with his life, and I don’t think it’s a good idea for us to try to delude ourselves into thinking it is.

I think that using lethal force in self defense would be a way that I would simply fall short of the ideal that authentic Christianity puts forth. I think that pretending that anything other than this is the case is unhealthy, and leads to an unavoidable distortion of things, and I think that a deliberate progression of such delusions and their consequent distortions are precisely how we have arrived where we are today.

Well, this ended up about as rambling and incoherent as I figured it would. I hope it made sense to one person at least.