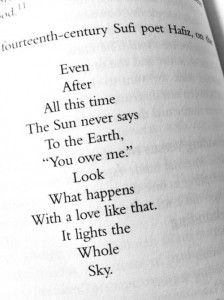 It is with great sadness that I make mention of the death of Kayla Mueller. Kayla had been working with a group called Support to Life, bringing humanitarian aid to victims of the conflict in Syria, prior to her death. She was taken captive by Isis in 2013, and a few days ago it was confirmed that she has been killed while still in captivity.

Immediately afterward, some corrospondance that she had sent to family while still in the midst of this ordeal surfaced in the media. The letter spoke of her having found solace in God alone after everything else was taken from her, and basically described the incredible freedom that she felt in knowing that she had truly given everything that she had in trying to make the world a better place. At the same time, some statements she had made to a local newspaper in her native Arizona began circulating, in which she had spoken with great passion about the need for privileged Americans to wake up to the suffering that much of the world still experiences as a result of backwards govermnental and theological systems, and to do something about it.

As I spent time reading about Kayla, I found myself gradually becoming more and more aware of the ginormous degree to which my own self-absorbtion has, by and large, dominated the course of my life heretofore. Kayla died a martyr because the life that she lost was spent wholeheartedly on helping those less fortunate than herself to get closer to the reality of an existence worth having, and I have mostly spent mine on the philosophic and moral equivalent of…ugh, I don’t even know, man.

Not that simply curling up into a little ball and feeling like garbage is the answer to anything. No. These are the realizations upon which a life worth living can be built. How would anyone become alive unless something were to wake them? Awakenings can be gentle or they can be rude, but what matters in the end is what we do in response to them. How am I going to live my life differently, having been moved by what I’ve read about Kayla? How am I going to choose my ongoing response of biological existence in each and every present second? By pressing onward and upward, and fully apprehending.

I cannot change the past, but I can choose to make the most of each passing moment. I can reach out and take hold of it, and from them all I can craft a new reality. I am grateful for people like Kayla, who conspicuously choose the higher ground, not only because it is what is necessary for the world to become a better place, but because it gets the attention of others like me and you, who are then able to carry out the spiritual legacy of authentic self sacrifice one redeemed moment at a time.