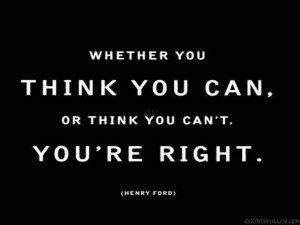 In the often overlapping worlds of drug rehab and mental health treatment, there is a ubiquitous piece of paper tacked to a wall. On it are perhaps around two hundred words or so on how a person’s attitude will determine the outcome of virtually every situation they will ever find themselves in during the course of their life. I can’t remember exactly how it goes, and I can’t find it in the Google tubes right now, but approximately every single one of you who have spent any significant amount of time sitting in therapists’ offices will know exactly what I’m talking about.

I used to hate that piece of paper. I hated it so much. To me, it represented the mantra of a sort of perpetually gloating uberclass of human beings. These were the people gifted with a positive mindset and an extraordinary degree of motivation and self discipline. To me, that piece of paper was just a big middle finger being offered in lieu of a thumbs up, from one kind of human being to another. It was a big, plastic smile and a cryptic gaze that said, “You can do it! But you probably won’t.”

I realize now, of course, that I was seeing all of this through a very twisted lens, but for a long time it really did seem to me as though this were the reality of the situation, and even when I did start to ponder whether there may perhaps really be something more genuine and credible going on behind such credos and maxims after all, it took years for me to arrive at a place where I could get beyond just wondering and really believe it to be so. After that, it took the most painful personal crisis I’ve ever encountered to force me into the corner I needed to be in so that I would have the necessary motivation to attempt the actual application of these principles, and then it was maybe about three solid months of pushing forward against the overwhelmingly powerful currents of habitual thought patterns before I was able to see any appreciable type of progress, or positive results. I really do hate that I am so stubborn and thick-headed that it takes such ridiculously extreme situations to get me to relinquish my grip upon the poisonous comfort of my familiarities, but, alas.

For all those years, though, I was convinced that trying to change was useless, and that true and lasting change was impossible for me. As long as I believed this, then it was. After all of that hopelessness and negativity had marred everything I held dear to the absolute brink of complete and total ruin, I found myself with only two options: continue as I had been doing, and get more of the same, or take a gamble on going against the grain. I exerted every last drop of mental and spiritual energy at my disposal, and sought to belive that beyond all of the twisted brokenness of the reality I had known all my life, there lay something else. Something good.

Now I am beginning to really see some progress in the actual changing of the way my mind works. Example: I was scraping ice off my car yesterday with a vacuum cleaner attachment because I didn’t have a proper scraper. It was pretty cold, and my hands were going numb. I had snow creeping into my socks because I was wearing sneakers, as I hadn’t been able to find my boots. Things were beginning to get silly. I was barely aware of any discomfort whatsoever, though. All I could think about was how nice the snow looked, and how warm and comfortable it was going to be to come home and curl up under some blankets after work. A year ago, I would have been angry and miserable, focusing intently on how awful everything was, and lamenting my wretched, pathetic excuse for a human life. The difference between the then and now of things was really that night-and-day, and as I reflected on this, I was encouraged.

It’s not been like this 24/7, and I still have bad days. Spontaneous positive thinking is something that has heretofore been entirely unknown to me in life, though, so I think it’s a legitimate cause for experiencing a degree of ecouragedness.

Basically, if I can make this kind of progress in four months (or however long it’s been since my wife left me and I had to choose between pursuing recovery in earnest or finding a memorative and creative method of killing myself) then I am super excited about the kind of progress that I will have made a year from now. It’s the hardest thing I’ve ever done, though, and I have done a hell of a lot of really, really hard things in my life.

2 replies on “On Being Convinced”

There’s so much awesome in this post. Spontaneous positive thinking is amazing, and certainly worth celebrating.

Thank you, Virginia. The encouragement means a lot!