Someone recently made a comment on a Facebook post about our current (U.S.) President being the “biggest traitor our country has ever known,” and it got me to thinking. When I was a kid, the Left and the Right were at odds, of course…but I don’t remember them ever being so seemingly on the verge of actual, physical war with one another. At least not like this.

When I was growing up, my mom was a passionate progressive, while my best friend Mike’s mom was an ardent conservative. They both held firm personal convictions based on their own political, social, and religious ideologies, and they disagreed about a lot of things. It was kind of hard to tell, though, because they mostly just sat and had coffee and spoke to one another politely, like civilized human beings. Their disagreement with each other’s worldview certainly never spilled over into any kind of emotional overload or outburst.

That’s just how things were back then, by and large. America was still mostly what it had been founded to be: a place where human beings could coexist in harmony, no matter what their race, religion, or political configuration happened to be. And it wasn’t all that long ago, either. Something, though, has happened to our social fabric since our country’s inception all those years ago. Something bad.

It seems to me (and maybe I’m wrong, but just hear me out) that it is almost no longer possible in our culture for two people to respectfully diagree on anything of any significance. Or even anything of no significance. I mean, for crying out loud, I was taking a stroll around the Internet last night, minding my own business, when suddenly my consciousness was invaded by The War of What Color the Dress Actually Is. 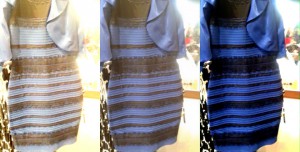 The latest in a long line of trivialities which have provoked vehement hatred betwixt bretheren, and set households at variance.

Ok, so basically someone posted a picture of this dress on Tumblr and asked what color people thought it was. Apparently there is something about the exact colors of the garment’s fabric that is just right on the edge of one being possibly seen as two different hues depending on one particular retinal variation or another. I don’t know. I’m not an ophthalmologist. All I know for sure is that some people see this dress as black and blue, while everyone else sees it as white and gold.

Regardless, though, soon after someone posted the original picture, a spectator started ridiculing others over a discrepancy regarding what color the dress actually was, and immediately all hell broke loose. Everyone on the entire Internet was ready to kill each other over it.

It’s not just the dress. It’s everything. People out there are angry and desperate, and just itching to take it out on one another over almost anything, and the question I can’t help but ask myself is Why?

If you take a few steps back and look at the big picture, you see Americans so neatly divided into two ideological camps that it’s almost like someone has made a surgical incision right down the very middle. You’re really not allowed to abstain from joining a side, either. At the risk of sounding like that guy who stands on the streetcorner trying to convince passersby that there are shape-shifting reptilian alien overlords holding the positions of highest influence within human society and overseeing the broadcasting of subliminal messages over the airwaves, convincing everyone to either think one way or the other, I would just like to say that if this whole situation seems normal to you, then…I don’t know. Maybe I’m wrong. Maybe all of this is totally normal, and everything is fine, and I should just be medicated.

One thing I know for sure, though: as long as we are perpetually using all of our energy hurling insults at one another over perceived discrepancies of some kind, we stand very little risk of doing anything beneficial or productive, and we are certainly shielded from any danger of moving forward into a better tomorrow.

I propose that we agree on the basic premise that human beings are worth something, and should all be treated with dignity and respect. I propose that we stop fighting against one another and start directing our energies toward combatting the complacency and indifference that stop each of us from moving forward into our own personal life of maximized potential. After all, what is the meaning of life if it is not to become the best version of yourself that could be produced given the raw materials you have available to work with?

Also: that dress is black and blue, and if you think it’s not, then you need to be locked up somewhere safe.